Hiking and petroglyphs and The Shale Controversy.

I live in Albuquerque, New Mexico. A few days ago, I was awakened by a swooshing sound, jumped out of bed and ran to my deck — this is what greeted me.

“Dr. Palmer holds a PhD in Physics and spent 18 years as a scientist with BP, and another 12 years after that as a consultant. He decided to write “The Shale Controversy” now in order to try to tell both sides of the story in a fair and scientifically accurate manner. In my view, he has met that goal in a balanced and comprehensive way that no one before him has been able to achieve. This is another book that is a must-read for anyone wishing to know the truth – both positive and negative – about fracking and the shale business in the United States and globally.”

David wrote this in an article in Forbes.com where he is a contributor. Click here to read his article if you are interested.

Now to hiking and the petroglyphs.
With Kim, my step-daughter, I drove toward Grants and turned of on road 117 heading south to El Malpais (pronounced Mallpie ees) National Conservation Area. El Malpais translates to “The badlands” in Spanish.

The next turnoff was signed as Sandstone Bluff Lookout, or something like that. Fantastic view over the black lava rocks which fill up the valley below. A result of the youngest volcanoes in New Mexico, about 4,000 years ago, it’s named McCartys lava flow.

View from the top of the sandstone bluff cliff you can see the large black layer of lava rock in the distance. Lava rock is actually basalt.

Kim resting under a pinyon pine tree. It was a cold day!

The Gray Nomad resting against a sandstone bench.

We drove a few miles further to a turnoff labeled Lobo Canyon, if my memory is good. We had to cross a large dry arroyo and walk a mile to get to these remarkable petroglyphs.

The petroglyphs were pecked into the sandstone wall and are about 700 years old.

That nite we cooked dinner. We’re a good team. I baked the Chilean seabass, and Kim cooked the potatoes!

The people from El Malpais.
For more than 10,000 years people have lived and interacted with the El Malpais landscape. Prehistoric sites and artifacts are kept alive by the spiritual and physical presence of contemporary Native American groups, including the Ramah Navajo and Puebloan peoples of Acoma, Laguna, and Zuni. These tribes continue their ancestral uses of El Malpais including gathering plant materials, paying respect, and renewing ties.
++++++++++++++++++++++++++++++++++++++++++++

This site uses Akismet to reduce spam. Learn how your comment data is processed.

Amazing pics, Ian! I wish I enjoyed outdoors and hiking!!!

Very interesting Forbes articles Ian. I had questions as I read, which you eventually answered. I live next door to the Powder River Basin in WY, and the activity there will affect our East Idaho labor market, as people will work there and come home on weekends or at other intervals. I also found the interview comments interesting. Good job and good use of your extensive oil-patch knowledge. I think the need for oil and gas supplies between now and 2050 will present major problems for each presidential administration, as the balancing act will be precarious, like the “Fiddler on the Roof.”

I also enjoyed the pictures and comments regarding your hike with Kim. Sounds like a place I would love to visit. Thanks for your educational and entertaining blogs post, I find them refreshing, informative and rewarding in many ways.

“This is another book that is a must-read for anyone wishing to know the truth – both positive and negative – about fracking and the shale business in the United States and globally.” ~ David Blackmon, Editor of Shale Magazine and contributor to Forbes.com

“The Shale Controversy has it all: politics, science, economics, history, geography, geology. I could keep adding to the list, but in summary, this book looks at the oil/gas and environmental predicament through several lenses.”  ~ Terri Koontz, College Biology Professor, Albuquerque

“I have only heard the hype about fracking in the past and would say I was skeptical at best. Reading The Shale Controversy has given me a wealth of information on the subject. It is an enjoyable and not difficult read which is surprising as the subject is very technical. . . . I highly recommend The Shale Controversy if you want an expert’s view.” ~ Robyn Wilde Hood, Fashion Quality Manager, Adelaide, Australia

If you want truth and not media hype, this is your book. Dr. Palmer is a known shale-fracking expert who is brutally honest about the significant drawbacks but also clear about the incredible potential of shale. I disagree on the role of fracking relative to global warming because I’m a climate change skeptic. But I highly recommend this book.” ~ William B. Collier, Professor of Chemistry, ORU, Tulsa

“It was hard to put the book down. I would highly recommend FracMan to anyone who would enjoy an inspiring Christian story with a bit of romance and insight into the potential connections between fracking and earthquakes in the shale-gas/oil industry.” ~ Debbie Loftin, Reservoir Engineer, Durango, Colorado.

“After all these years I finally have an idea what fracking really is and the correlation to earthquakes.  With the wonderful love story aside..” ~ Brian Morrison, Remotely Operated Vehicle (ROV) Pilot/Superintendent, Albuquerque

“Ian is at his best when describing how people resolve spiritual differences as they strive to make their relationship work.” ~ Garrick Little, R&D Chemist (ret), Lincoln, Nebraska.

“Your book gives me the desire to go hiking and look at God’s creation in a different way.Thank you. You did a great job!” ~ Bonnie C.

“You are a silver-tongued orator, and I liked how you captivated the reader with conflict, then presented your thoughts via discussion.” ~ Don S.

“Sit back, relax, clear your head and then prepare yourself for an entertaining journey. I loved the book, and found it hard to put down.” ~ Garland R

“This is a book that taught me a lot about myself and a book that challenged me to grow spiritually.” ~ Trevor T.

“I liked this book because it was easy to read and effectively provided advice and solutions for real problems in American society. I think it is a useful and inspiring reading for both teenagers and their parents.” ~ Zissis M.

All photos used on this website is copyright Ian Dexter Palmer
Listen to Dr. Palmer on In the Oil Patch 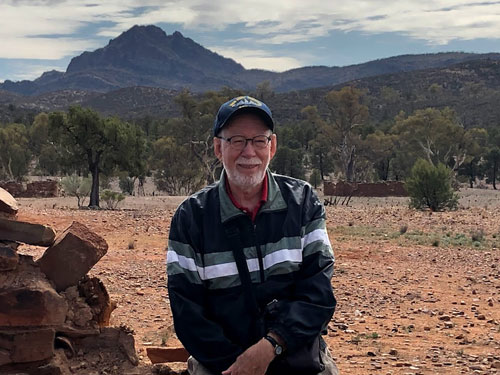